Brewster County is the largest county in Texas, and one of the least populated. Its 6,100 square miles encompasses Big Bend National Park and part of Big Bend Ranch State Park. Brewster County has seen a parade of nomads and settlers across its harsh and mountainous landscape stretching back more than 9,000 years.

Brewster County was created in 1887 and named for Henry P. Brewster, a lawyer, statesman and soldier who fought in the Texas Revolution and was a colonel in the Confederate Army. After the Civil War, he served as the Commissioner of Insurance, Statistics and History for the state.

Originally three counties were carved out from Presidio County in 1887, but Buchel and Foley Counties were never organized and were absorbed by Brewster County in 1897. The population of the vast area at that time was just over 1,000 people.

Around 1900 a boom in mercury mining began in the southern part of the county, increasing interest in the remote desert lands on the Rio Grande. By 1905 the mines around Terlingua were producing 20 per cent of the country’s mercury. Other entrepreneurs developed industries in guayule rubber, candelilla wax and fluorspar, to add to the burgeoning cattle, sheep and goat industry that had flourished since the 1870s. The population rose to 2,300 in the last decade of the 19th century.

As mining, military and cattle lost prominence in the 20th century, tourism rose as the main economic activity in the region. With the addition of Big Bend Ranch State Park in 1991, more public lands drew more and more visitors to the small, widespread towns of Alpine, Marathon, Lajitas, Study Butte and Terlingua. With a population of just over 9,000 as of the 2020 census, the vast empty spaces and eclectic communities continue to be a source of fascination to visitors. 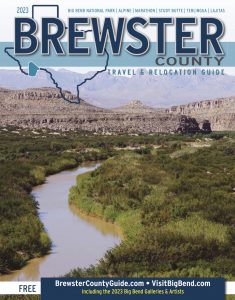 Blue Sky Productions has produced newspapers and magazines in the Trans-Pecos Region of Texas and in Southern New Mexico since 1988.

Our other Big Bend publications:

Map of the Big Bend and Davis Mountains